Histamine intolerance is a recently identified condition where people have an “allergic” reaction to the histamine found in food.  Histamine is a molecule that we all make that’s involved in the nervous and immune systems.  Many people know of histamine due to its role in causing the symptoms related to allergies:

People with histamine intolerance begin experiencing these symptoms when they eat foods with high levels of histamine or that cause the release of histamine.

While this part is true, I’m not sold that the current science on histamine intolerance is up to snuff.

How histamine intolerance develops is anyone’s guess.  The predominant theory was that one of the enzymes responsible for breaking down histamine, diamine oxidase(DAO), begins to malfunction.

Many believe it’s due to a deficiency in magnesium or other nutrients that help DAO function.  At one time you could count me in that camp.

I wrote an entire blog on this on my old site that you can find here.  As the science has evolved, so have I.  I believe most people are deficient in magnesium and that magnesium can help.  I don’t believe magnesium deficiency is the cause of histamine intolerance.

A more recent observation is that some with histamine intolerance may have mast cell activation disorder(MCAD).  Mast cells are immune cells that store histamine and other inflammatory substances.  When stimulated, mast cells secrete these substances and cause a local inflammatory reaction. 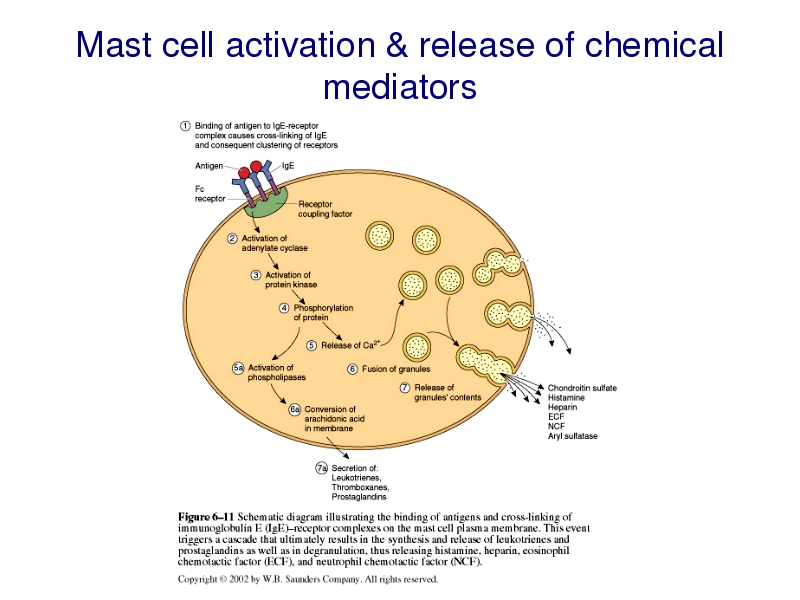 People with MCAD have “mutated” mast cells that are hyper-sensitive to stimuli.  This causes an inappropriate inflammatory response and can lead to the symptoms mentioned above.  How they become mutated is unknown.

In people with histamine intolerance, this source of histamine can provoke their symptoms.  But the link between histamine and bacteria doesn’t end there. Since histamine is used as a signaling molecule in bacteria and humans, inappropriate levels can cause a bad response in humans by disrupting healthy immune signaling.

Inflammasomes are groups of sensors and receptors that monitor the local environment and respond appropriately.  Different inflammasomes regulate different environments and the one in the gut regulates the microbiome.  One could say that the inflammasome is one way bacteria that make up the microbiome communicate with their host. Recent evidence supports this notion(1).

Mast cells and the inflammasome

People with the genetic disorder cryoporin associated periodic syndrome(CAPS) have a mutation in the NLRP3 inflammasome.  Normally, NLRP3 causes a local inflammatory response to stimuli and resolves the issue.  People with CAPS have a mutation that causes an exaggerated response to certain stimuli.  Since NLRP3 is expressed in the skin, lungs, joints and gut, symptoms can occur everywhere.

Rashes are very easy to study because you can see them.  In some people with CAPS, antihistamines can improve rash symptoms but in many they don’t work.  In these cases, inhibiting IL-1B seems to do the trick(2).

Is it genes or environment?

Some people develop histamine intolerance which makes a genetic mutation unlikely.  You spend most of your life eating whatever you want and you develop an intolerance to histamine.  Decreased enzyme efficiency due to nutrient deficiency makes more sense than a genetic mutation.  Now, aberrant inflammasome activity seems a bit more attractive.

It definitely makes more sense than reduced enzyme efficiency, especially if your diet hasn’t changed much.  Of course, improving DAO activity can make up for a mild increase in histamine.  But is it fixing the cause of the problem?

A low histamine diet is pretty valuable here because you’re not reinforcing the dysbiotic environment.  It should lead to improved signaling, an improved microbiota, and better gut health.  But again, is it fixing the cause of the problem?

If the problem is microbial dysbiosis, you’re simply kicking the can down the road.  If there’s enough histamine in there to overwhelm DAO the process has already begun.  And if there’s a deficiency in anything, it would be a signal from the inflammasome.

Combining something that turns on the inflammasome with decreasing your contribution to shutting it off would be a valuable approach.  Controlling these signals in the gut is a matter of hijacking the hijacked message.  And if you can do that, maybe you can fix the problem.

We’ll tackle how you do this in my first private blog exclusive to members of my facebook group.  You can join here, its free.  There’s no trick, I’m going to tell you how to do it and I’m not selling you anything.  I just ask that you consult your doctor before doing anything and that you share your experience with others in the group.  I also ask that you don’t share this info with non-members.  If you have any comments or questions, feel free to drop them in the comment section below.