In a previous blog I covered some interesting new research on gastritis caused by Helicobacter pylori.  In that blog I covered why you may want to limit a specific form of vitamin K2 and increase your intake of Omega 3 fish oils if you are experiencing gastritis due to H. pylori.  Check it out here if you haven’t read it.

I’ve been asked multiple times in my private facebook group to cover H. pylori and how it can cause problems.  I think now would be a good time…

About half of the world population has H. pylori in their stomach, and within this half of the population only 20% get a bad experience from it.  If you’re new to the game, H. pylori can cause gastritis, stomach and duodenal ulcers, and is associated with stomach cancer.

Just like all bacteria that are found in our gut, H. pylori has evolved with us.  As such, they tend to be well adapted to the environment in which they’re found…your stomach.  A few of the factors that make H. pylori well-suited to your stomach include:

It can neutralize your stomach acid

It can break down you inner mucus layer

It can bind to cells in the stomach 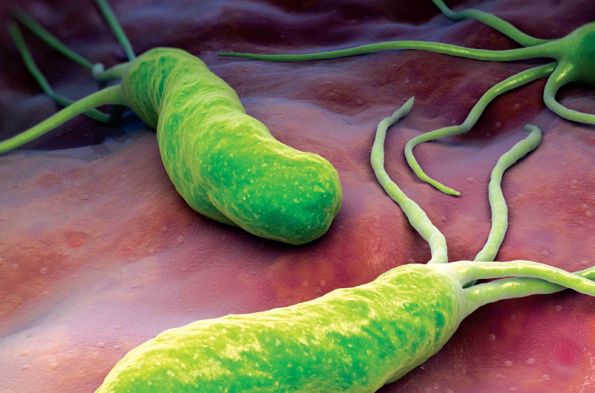 Many of the more complex traits that make H. pylori a resident in your gut would be worthless without the simple things.  This includes being able to move and hibernate.

Movement is easy for H. pylori.  It can find more hospitable areas by using its flagella, small tail-like projections that allow it to swim around the stomach.  This coupled with pH sensors allow H. pylori to evade damage caused by gastric acid.

Many of the more complex traits of H. pylori involve the enzyme urease.  Urease is an enzyme that breaks down the urea in your stomach in to ammonia and carbon dioxide.  This protects H. pylori by neutralizing the acid in your stomach.  It also causes damage to the epithelial cells lining your stomach if it comes in to contact with them.

Urease also has other advantages.  Your stomach has a protective layer of mucus that prevents microbes from coming in to contact with epithelial cells.  However, the consistency of this mucus layer is pH dependent.

In acidic pH, this mucus layer is impenetrable.  This prevents H. pylori from interacting with the epithelial cells and firing up the immune system.  When the pH rises this layer becomes looser and H. pylori can swim freely(cite).  Therefore, its urease enzyme improves its motility by giving it access to the deeper layers of the mucus lining.

This allows H. pylori to evade gastric acid better.  While the mucus layer protects from microbial invasion, it also protects the cells lining the stomach from acid. As this mucus layer is degraded, H. pylori is able to colonize and gastric acid can damage epithelial cells.  Both of these factors contribute to gastritis.

H. pylori: Cool or not cool?

Up until this point, you may have come to the conclusion that H. pylori is a bad mofo that you need to get rid of now.  In fact, the medical community came to that conclusion a couple of decades ago.  But I really don’t think it’s that cut and dry.

For one, most people who have it have no symptoms.  A lot of this has to do with the particular strain that’s populated your belly.  H. pylori has been co-evolving with us for 50,000+ years and different strains have evolved in different people.

A lot of this comes down to the strain you have which typically comes down to where you are from: The East or The West.  And there are a couple of genes that dictate whether H. pylori is friend or foe.

Two different genes are associated with the “foe” version of H. pylori.  These genes code for proteins that damage epithelial cells in your stomach called Cytotoxin-associated gene A(CagA) and Vacuolating cytotoxin A(VacA).

CagA is a protein secreted by some strains of H. pylori that can do some serious damage to your cells.  H. pylori strains with the gene inject CagA in to your cells where it can cause damage by disrupting tight junctions, causing cell death, increasing inflammation, and a host of other problems(cite1).  This gene is only found in about 40% of Westerners with H. pylori but is more common in those from Asian countries.

VacA has similar effects as CagA but rather than being injected in to epithelial cells it binds to receptors on the cell surface.  Like CagA, VacA can cause cell death and inflammation, but it also interferes directly with the digestive process.  It does this by reducing gastric acid secretion and blocking bicarbonate secretion in the duodenum(cite1).  This protein is found in most H. pylori strains.

Some strains have one of these genes while others may have both.  And it may sound far worse to have a strain with both genes, but some of the effects antagonize one another.  In this way, it’s not really cut and dry whether having both genes is worse than having one or the other.

There are other virulence factors that make some H. pylori strains worse than others.  However, some of these factors are protective for other conditions.  For example, the neutrophil-activating protein (HP-NAP) is both a virulence factor AND protective to us.

While HP-NAP helps H. pylori survive, it also fights tumors and modulates the immune system in us.  This immunomodulatory effect helps protect against asthma, allergies multiple sclerosis, and potentially other autoimmune issues(cite, cite).

I don’t necessarily think these beneficial effects are grounds for running out and getting infected with H. pylori.  The point is that H. pylori shouldn’t be viewed strictly as something you need to get rid of due to its association with ulcers.  Loss of H. pylori may also have detrimental effects that aren’t considered when handed your proton pump inhibitor(PPI) and antibiotics.

Towards a sane approach for handling H. pylori

There’s definitely reason to believe that eradicating H. pylori from a host with antibiotics can lead to a positive outcome.  In some instances, it may be downright necessary.

But it’s important to not put the horse before the cart.  You should also consider that eradicating H. pylori from your stomach can lead to some very poor outcomes.

Being able to identify your personal strain of H. pylori would be the ideal situation.  Unfortunately, we’re not there and even if your physician could test you and tell you which strain you have, the science is still a ways off.  Which of your genes interact with the virulence promoting bacterial genes to cause problems?

The most intelligent approach isn’t to focus on H. pylori at all.  You should focus on your own digestive health.  Even if you have a particularly virulent strain of H. pylori the problem isn’t the strain so much as the conditions that allow it to overgrow.

If you had a garden with different types of vegetables in it and some tomato plants grew in with the squash, would you kill all of the tomatoes?  Wouldn’t it make more sense to control the tomatoes and try to figure out why they were there in the first place?

In my opinion, the absolute best approach is to make sure all of your gastric defense mechanisms are working to prevent an H. pylori overgrowth from happening.  There are a number of things you probably do on a regular basis that impair these defense mechanisms.

The classic example is the use of acid reducing medications to help with ulcers.  This used to be the first line of defense against ulcers.  Unfortunately, acid secretion is the first line of defense against H. pylori overgrowth.  People may have gained a small immediate benefit in symptoms from taking PPIs or H2 antagonists in exchange for the long term burden of H. pylori overgrowth.

Another great example is taking NSAIDs like aspirin.  NSAIDs impair gastric defense by nearly every method imaginable(cite).  This could open up the opportunity for H. pylori to take hold and cause problems(cite).

Ironically, H. pylori may protect against acid injury in people who take NSAIDs(cite3), probably by reducing acid secretion.  Another consideration is that the end result is due to the sequence in which things occur.  People who are beginning to use NSAIDs benefit from eradicating H. pylori while those who are already taking NSAIDs gain no benefit(cite3).

An argument could be made that H. pylori overgrowth may be a beneficial adaptation to chronic NSAID use.  That benefit, however, may be short-lived and cause long term damage.

There’s no doubt that H. pylori can be a major problem for the digestive tract.  It’s association with gastritis and ulcers is real and preventing this damage can lead to the resolution of symptoms, a better quality of life, and improved digestion.

There’s also no doubt that controlling H. pylori is an important consideration for optimal digestive health.  The question remains whether eradication with antibiotics is a good idea.  Under certain conditions that can be identified with a detailed family and medical history, getting rid of H. pylori may be warranted.

However, in some people this may be unnecessary and lead to bigger complications down the road.  H. pylori has been evolving with humans for at least 50,000 years.  Multiple studies have shown it to be protective against tumors and autoimmune conditions such as asthma and allergies.

Whether treated or untreated, H. pylori should absolutely be controlled.  And the best way to do this is via changes in diet and lifestyle.  If that doesn’t work on its own, PPI and antibiotic therapy should be used in combination with lifestyle change, not as a separate alternative.

In my personal experience, I believe attempting to control GERD and gastritis with a PPI caused larger problems down the road.  While I was never a fan of having to clear my throat all the time, I was less of a fan of what came after.  Persistent digestive problems, whole chunks of food in my stool, and even worse gastritis are just a few of the issues I got to experience.  I can assure you, this is something you want to avoid.

Ultimately, I believe this approach led to an H. pylori overgrowth.  I never used an antibiotic in attempt to rid myself of H. pylori, which may be a good thing.  My problems grew exponentially larger once I attempted to come off the PPI.  These problems corrected with a bit of lifestyle change, a bit of mucosal defense bolstering, and a whole lot of recognizing my digestive limitations.

4 thoughts on “H. pylori: The good the bad, and the ugly” 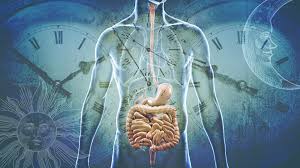