Anxiety disorders affect an estimated 40 million Americans every year.  This costs the US more than 42 billion annually(1).

The standard course of treatment for people with mood & anxiety disorders is entirely directed at the brain.  Selective serotonin reuptake inhibitors(SSRIs) are one of many classes of drugs used to elevate levels of neurotransmitters and other chemicals found there.

Long ago, scientists found that people with anxiety disorders had lower levels of a neurotransmitter called serotonin in the brain.  Neurotransmitters are chemical messengers that relay messages between neurons.

Like a game of telephone, stimulating a neuron that uses serotonin causes it to release serotonin to the next neuron.  Serotonin binds to a receptor on the target neuron and that neuron does the same to the next one, and so forth.

At some point, the target neuron kicks serotonin out of its receptor and back to the transmitting neuron that released it.  That neuron “reuptakes” the serotonin and stimulation stops.

SSRIs block the reuptake of serotonin.  This leaves more serotonin between the two neurons to cause repeated stimulation of the target neuron.  In serotonergic neurons, this causes a relaxing effect.  It’s effective, but blocking reuptake is a solution to the problem that completely ignores the cause.

But you’ve noticed this effect before, on the last Thursday of every November.  Serotonin is made from the amino acid tryptophan.  Tryptophan is the amino acid in turkey that induces nappy time.  In other words, it inhibits you.

Over the last decade, our understanding of the brain has grown by leaps and bounds.  We’ve identified something called the brain-gut connection that forms a communication hub between the brain and the gut.  One of the spookier aspects of this connection is that one end isn’t even directly controlled by us, it’s controlled by the bacteria that reside in our gut.

The bacteria in your gut, collectively known as the microbiome, talk to the brain through the vagus nerve.  The vagus nerve is enriched with serotonergic fibers.  And oddly enough, 95% of the serotonin in your body is generated in the gut.  But let’s not get ahead of ourselves.

Remember how serotonergic nerve transmission works?  Stimulating one nerve causes the release of serotonin which stimulates the next nerve, and so on.  So what stimulated the first nerve?  It wasn’t just spontaneous.  Something must have told that nerve to fire, and you would have to imagine it was another serotonergic nerve.

And this underscores the importance of the gut.  Not only is your microbiome perfectly positioned to be at the interface of you and the environment, your microbiome holds 100 genes for every 1 of yours.  And with all of that serotonin in your gut, it only makes sense that the gut is one of the places where the signal originated from.

Of course, other things are at play.  Your perception of the environment is important too.  And since perception is in your “head”, it’s also in a great position to communicate to the gut.  In fact, one could easily make the argument that stress is all in your head.

But if you don’t have the raw materials to make serotonin, you won’t.  Serotonin, also called 5-Hydorxytryptohan, requires tryptophan for synthesis.  Unfortunately, humans can’t make tryptophan, we need to get it from our diet.

Many bacteria that make up the microbiome can make tryptophan.  They also metabolize it in to other important molecules such as:

This is why the 2 way directional communication between the gut and brain is so important. 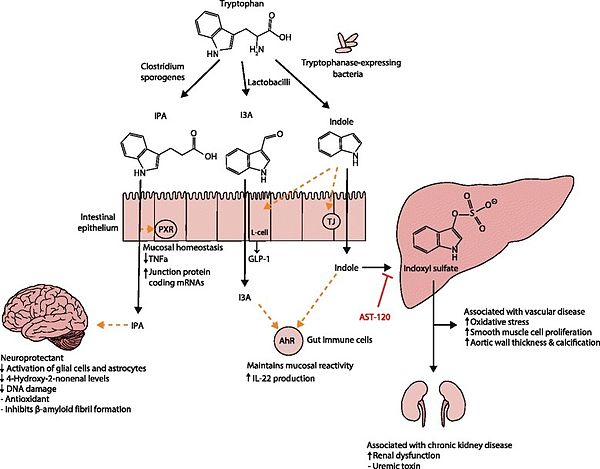 In all cases, gene/environment interactions are causing biological functions.  Specifically, the interaction between your genes and those in your microbiome.  Each acting as a separate signal to generate a response to the environment.

Of mice and men…

We’ve been testing this microbiome stuff out for a while with pretty strong results.  Take an anxious mouse and a chill mouse and swap their microbiomes(2).  It shouldn’t surprise you that they switch “attitudes”.

Even crazier, take the microbiome from an anxious human and implant it in to a chill mouse and guess what happens(3)?  Yup, and why wouldn’t it?  Serotonin makes mice chill too.

Taking a new look has shown even crazier results and strengthens the power of the microbiome.  Using a strain of mice that’s genetically susceptible to being shy, researchers implanted the microbiome of a more curious strain.  The results were shocking, the shy mice became more curious(4).  The microbiome was capable of overriding the mouse’s own genes and caused it to behave in a completely different way.

Now, there’s a reason that these mice have different microbiomes.  The gut-brain axis operates both ways.  The environment signals the microbiome, the microbiome changes your internal physiology, but what you do from there is a product of your genes and decision making.  This, in turn, regulates your microbiome.

I know, it’s convoluted and crazy, but I’ll explain.  One of the more powerful environmental factors regulating the microbiome is diet.  Attaining food is paramount to survival.  What goes through your gut regulates the bacteria there.  Mice that are the appropriate level of curious or shy are rewarded by being able to attain food.  They evolve, and their microbiome evolves with them.

Maybe the shy mouse evolved in an environment full of predators.  Without being curious and reckless, they’re rewarded by being able to procure food before being killed.  A curious mouse probably won’t flourish as well in such an environment.  But if the food that a shy mouse was able to procure caused it to be more reckless, its chances of survival diminish.  The perfect balance is needed.  It’s actually not exactly like that, these mice are genetically engineered, otherwise we’d have to wait forever to perform studies.  But that’s how it works as a general concept from an evolutionary standpoint.

Your circadian clock and the microbiome

The interaction between your circadian clock and that of your microbiome has a major impact on your physiology(5, 6, 7).  It can affect your appetite, mood, energy levels, blood sugar, ability to lose weight, ability to focus, sleep/wake cycle, and more.  Nearly everything.  It also means that as the day changes, so changes your microbiome.

The end goal of this gut-microbiome interaction is to get you and your bacteria further in time so that you can reproduce and pass the torch to the next generation.  You’re helping each other get through life.

Meal and sleep timing are important

When you eat and wake up both have a pretty powerful effect on your microbiome and how it changes throughout the day.  With awakening and exposure to sunlight, melatonin production is blocked in the pineal gland.  Once darkness hits, melatonin is produced and helps regulate your sleep/wake cycle.  It also regulates the microbiome as some bacteria metabolize it(8).

Getting food’s important, right?  Don’t you think if food only presented itself at night and that’s when you ate your sleep schedule would flip?  It would have a huge impact on your microbiome, we know it does(7, 9).

What if your diet’s terrible, or you spend most of your day sitting at a desk and finish on the couch?

There are a lot of common environmental factors that are prevalent in modern society that could mess up brain-gut communication.  In the past 100 years we have seen so much “progress” that what we need to do to survive now is nothing like what we had to do then.  This includes:

Research is peeling away the layers of the onion and finding that our modern lifestyle may be causing many of our problems.  A lot of this could be attributed to the brain and microbiome not playing well together.  We do know that mild to moderate depression is non-existent in hunter-gatherer tribes that live similar to the way we evolved in(10).  Their microbiome is also vastly different.

Vastly different is putting it mildly.  In a hat tip to the power of the environment, research shows that the microbiome of a hunter gatherer tribe more closely resembles that of wild primates than modern humans(11).  Another recent study found that placing monkeys in captivity causes their microbiome to shift to that of Westernized humans(12).

In the right environment, that mouse can be less anxious.  In another, they remain anxious.  At the center of it all is the way the environment, brain, and microbiome communicate with one another.  So why is the solution to mood disorders a pill?

Depending on which metric of success you use,  SSRIs are succesful.  If you compare them to doing absolutely nothing they’re great.  They can help anxious people become less anxious without having to do anything other than take a pill.

The problem is, they’re no more effective than just exercise alone for mild to moderate depression(11).  And that’s just one variable.  Eating a healthy diet, getting regular physical activity, waking up early and not eating a ton of calories late at night should have a dramatic effect.

Unfortunately, you can’t patent that.  Governmental agencies do a little research in that area, but by far the greatest investment in clinical research is from the pharmaceutical companies.

Now, this doesn’t mean that pharmaceutical drugs can’t be part of the answer.  Maybe they’re the force that gets the ball moving.  Maybe people with severe mood disorders need the boost pharmaceuticals can give them.  But does taking a pill every day for the rest of your life really mean you’re cured?  It’s certainly profitable.

Let’s be honest, the pharmaceutical industry wants to make a profit, or at the very least be able to pay for the research they do.  And they definitely do good, they’re not the big bad boogie men people make them out to be.  But who would pay for research that has no return on investment?  Where is the money in telling someone to exercise?

I think a better question is do people with mood and anxiety disorders care about return on investment or do they just want to get better?  If you’re the former good luck, if you’re the latter you should stick around.  I’m going to hit on all of these things in the near future.